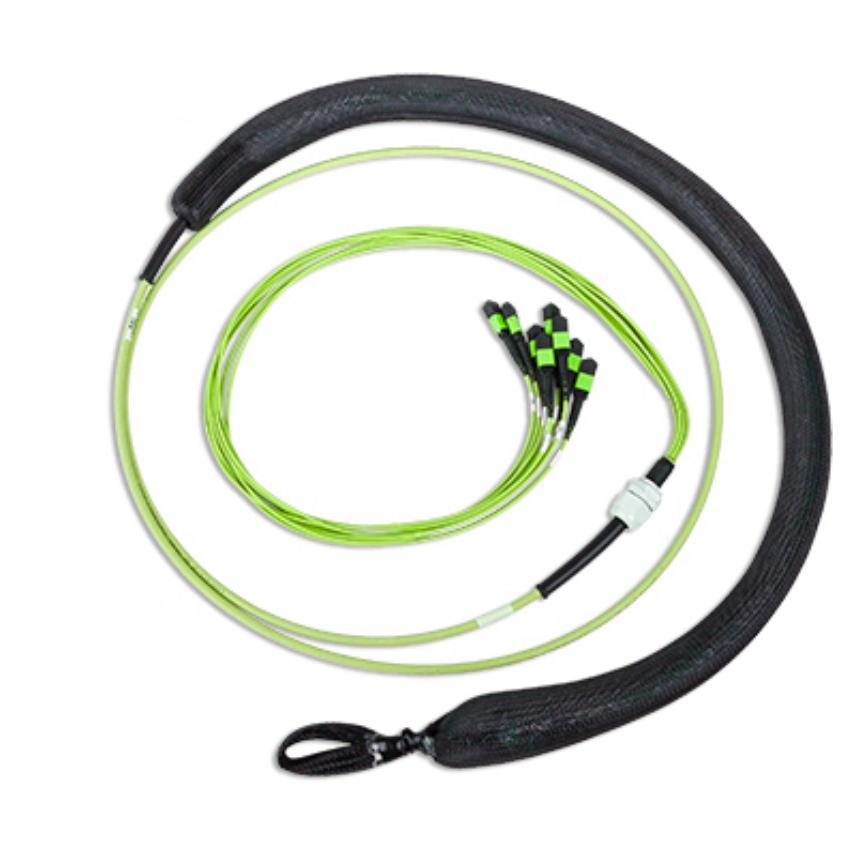 Pre-Term for data centres, buildings and campus based on Micro-Bundle Universal

The cable has a small diameter and bend raduis to meet data centre requirements.

The cable is watertight and rodent retardant due to the glass yarns.  It can be used in buldings and between buildings.

The cables have been tested for fire performance according to the new Construction Product Regulation: EN50575:2014 +A1:2016.

According to this standard the cables have a very high fire performance with minimal fire load and spread, smoke density, droplets and acidity: Cca.

The Declaration Of Performance for these cables can be found under fibre cables and the corresponding cable for fibre count and fibre type in the section “Micro-Bundle Universal Cca”.

The MTP-MTP Pre-Term has standard pinned (male) connectors. This matches with the un-pinned (female) connectors in the ENSPACE modules and the female Plug&Play modules.

After the cable gland the Pre-Term has a fan-out. The fan-out splits the cable into tubes. The tubes are reinforced with aramid yarns. At the end of each tube a MTP-connectors is mounted. The jacket of the tube is the same colour as the cable jacket. Close to the MTP-connector a label is installed to identify the number of the leg.

The Pre-Terms are optimized for both pulling and laying in data centers. On both sides the MTP connectors are protected by a bubble foam. On one side there is also a protecting net around the fan-out with MTP connectors and a pulling eye. The maximum pulling force on the pulling eye is 450N.

The MTP-MTP Pre-Terms come with a PG-13 cable gland that fits into the LANmark-OF ENSPACE and Plug&Play patch panel slots.

The insertion loss of a MTP-MTP* connection is measured according to standard IEC61300-3-45.

For a duplex transmission like for 10GBase-SR (10G) polarity in the channel is maintained with this method C design and the use of the same straight cassettes on both sides. In addition the same patch cords can be used on both sides.

For parallel optics for multimode like for 40GBase-SR4 (40G) these method C Pre-Terms can be used with key up/key down adaptors on one side of the channel and key up/key up adaptors on the other side. The same straight female-female patch cords can be used on both sides.